One Boy Missing by Stephen Orr 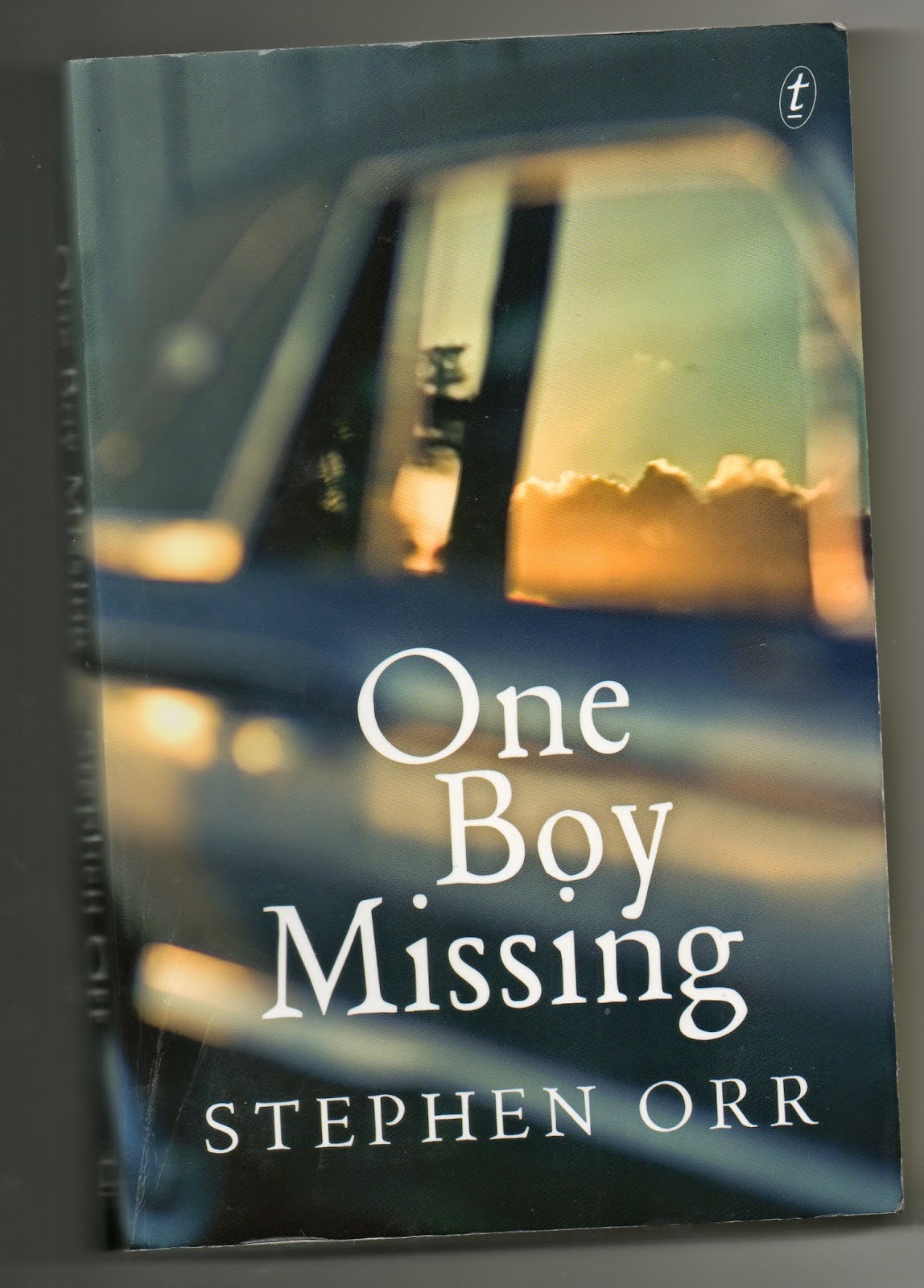 Guilderton, small town Australia. The kind of place where nothing happens and where the best thing about it is the road out. It’s about as far removed from the image of the sun drenched beaches of the Gold Coast as you can get. The town, dying from within, is only sustained by the tenacity of its residents and local farmers. In short a people who keep to themselves and regard strangers with jaundiced suspicion.


Into this world returns Detective Bart Moy, one time local who left to join the big city police force. Leaving the glamour and bright lights of the big city behind he’s back essentially to take care of his argumentative sickly father. The truth however is that Detective Moy is running from his own ghosts and hopes in Guilderton to find some peace from his demons. Demons which will pursue him as the novel progresses.

The novel opens with the local butcher reporting what seems to be a child abduction in a back lane behind his premises. He’s sketchy and not too sure about what he’s seen. Could it just have been a case of a boy playing truant and an angry over exasperated father? Possibly but nevertheless Detective Moy seems compelled to investigate.

As the story progresses a series of seemingly unconnected incidents a body discovered on a coastline miles away, a burned derelict building found to contain the corpse of an unknown woman are bound together. From working the case we discover that Moy isn’t exactly welcomed back with open arms. The locals are hardly in awe of their returned prodigal. He’s a stranger now, too long away to be one of them. Moy has big city ways and he regards the town with the haunting nostalgia of his youth.

But Moy is haunted by many things. The death of his child in an accident he himself was the cause of, the end of his marriage, a career that’s stalled and the health and well being of his father.

One of the strengths of the novel is the relationship between Moy and his antagonistic father George. Throughout there is a genuine feeling of fondness and affection between father and son. Yes they do rub each other up the wrong way. Yes there are words between them, sometimes the verbal exchanges are harsh. The dialogue between the two men is sharp, crisp and to the point, not one word is out of place. Without doubt this is one of the strengths of the novel.  Overall there is a feeling that here are two men who both admire and respect each other. Both care how the others doing, both lookout for each other.

Sincerity is a strong point in the novel. When Detective Moy is confronting his demons the reader gets a genuine feeling of a man to overcome the horrors which torment him. Here is a character tortured night and day by what has been taken from him.

As the case continues the characters background is slowly drawn to the surface. We learn the back stories and as regards family history all is not as it seems.

One Boy Missing by Stephen Orr is a crisp sincere novel, which, in this part of the world, will serve as an excellent introduction, to a class writer.

Labels: One Boy Missing by Stephen Orr. A Review 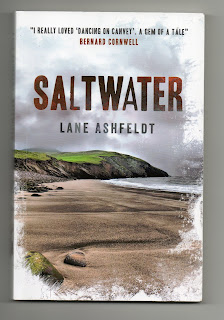 Throughout "Saltwater", it is the sea which is the most constant. The sea characterises each story in this, Lane Ashfeldt’s first collection of short stories. The sea both causes and bears witness to our despairs and triumphs.
Ashfeldt’s stories take place in a variety of destinations. Haiti, Greece, England, and New Zealand are all settings where the sea both destroys and redeems mankind.

Set during the earthquake which hit Haiti in 2010 "Catching the Tap-tap to Cayes-de-Jacmel" tells the story of Lucien a young man trapped under the rubble of a collapsed cinema where he worked. A country boy he longs to return to the countryside and the familiarity of his home town.

"Dancing On Canvey" relates how a girl, who wants desperately to grow up, survives the flooding of her island home, in the Thames Estuary.  First loves and their mysteries are swept away and nothing for her will ever be the same again.


The title story "Saltwater" concerns the a group of sailors who take their craft from Ireland to Cornwall to collect china clay for the Arklow Pottery. A seemingly innocent commercial journey but one which is set during WWII. As the sailors battle for survival the story also relates an outing the wife of the captain takes with her children, but even this simple trip is not without incident.
The main strength of this collection is the ability of the author, in a few deft sentences, to get into the mind of her characters. We empathise with them and find ourselves cheering them on as they battle through whatever life throws their way.  Lane Ashfeldt is an author destined to have a bright and glorious future. 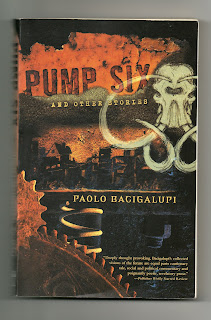 "Pump Six" is the first collection of short stories by American science fiction writer Paolo Bacigalupi. Set in the near future on an Earth where the citizens are seemingly trying to come to terms with society around them.
In "Pocket Full of Dharma", Wang Jun a young homeless boy is chased through the streets of Chengdu city. Unbeknownst to him Wang carries the soul of the Dali Lama in a datacube.

"The Tamarisk Hunter", tells the story of Lolo, and his attempts to eek out a living in the now desert state of Utah. All Lolo wants is dignity for himself and his wife.

While in "Pop Squad" we learn of a world where immortality is declared compulsory. But what happens if people want something more than everlasting life?

Food shortages and genetic modified crops, wars for natural resources and environmental degradation, bioengineering gone horribly wrong, religious and political fanaticism, are just some of the problems Bacigalupi presents us with. His is not a vision of humanity grappling with the stars rather one of the individual struggling with the earth.

However there are positives to be taken from these dystopian tales. The refusal of the main characters to surrender to bigger forces and their willingness to fight against impossible odds. The ability of the individual to strike out and see that there’s more than just running with the herd.

Bacigalupi’s thought provoking tales cover fears and concerns many in the 21st century will be more than familiar with.

The Moon and Sixpence by W. Somerset Maugham 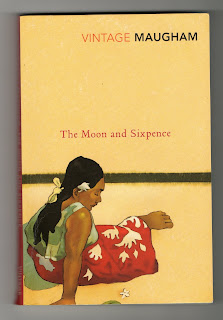 Charles Strickland is a well to do London stockbroker. He is apparently a happily married family man. Those who know him describe him as a dull, plain man, a hardworking stalwart of Edwardian England.
Inexplicably then he vanishes leaving telling his wife that he has gone to live in Paris. His wife stunned asks the narrator to find Strickland and tell him to return home. Rather reluctantly the narrator obliges.

What emerges in Paris is not a married man having one last fling with a paramour in a fine hotel but rather a burgeoning artist who has left the stifling conventions of London behind in order to pursue his innate calling.

As the novel progresses we learn that Strickland has risked all in pursuit of his art. He lives in dire poverty in Paris taking help from all who offer it. He travels to Marseilles where after an altercation he works his passage to Tahiti.

All of which sounds very virtuous and noble. Nothing could be further from the truth. As a character Strickland is totally dislikeable. He is arrogant, vein and irresponsible. His actions bring death and disaster upon those who love him most.  He cares nothing for his wife and children and less for the concerns and worries of others.

Written by Somerset Maugham in 1919 and based loosely on the life of painter Paul Gauguin, "The Moon and Sixpence", can said to be both a meditation on genius and a damning critique of Edwardian society.

Labels: The Moon and Sixpence by W. Somerset Maugham 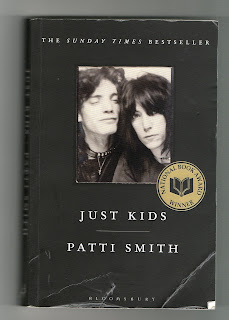 Patti Smith has written a memoir recalling her friendship with photographer Robert Mapplethorpe. Touching and incredibly vivid Just Kids tells of their initial meeting as penny less artists in New York in the 1960’s. It relates their love affairs, both together and apart, their struggles to establish themselves and ultimately the successes they both achieve.
Throughout Smith makes no attempt to disguise the affection she held for Robert Mapplethorpe who at times would serve as Smith’s friend, lover, teacher and inspiration. The story of their life and times together is extremely touching and highly personal and I’d imagine it was an extremely difficult story for Patti Smith to recount.
Many will be fascinated by the time Patti and Robert spent in the Chelsea Hotel where as young artists they first encountered the good and the great as they paraded in style through the corridors or buried themselves behind their doors. Here Smith throws a less than glamorous light on the lives of the various artists she encounters. But she also relates the many touching moments and acts of generosity she experienced.


Great names of the artistic and rock n roll world stride through this memoir. Alan Ginsberg, William Burroughs, Janis Joplin, Jimi Hendrix, Andy Warhol and of course Bob Dylan are just a few of the great ones the reader will meet. Looking back the late 1960’s seem to be a time of high ideals with a dark destructive underbelly. You had the scene in New York and the reaction against war in Vietnam. Smith captures the atmosphere of the time and the reaction to both.
Ultimately though it is the tragedy of Robert Mapplethorpe’s death from an AIDS related disease that is the reason for the memoir’s existence.  Once the initial spark of friendship is ignited Patti Smith and Robert Mapplethorpe vowed never to leave each other. Just Kids proves that up to Robert’s death and beyond, they never have.